Eid al’Azha also called the Feast of the Sacrifice, the “Major Festival”, the “Greater Eid”, Baqr’Eid  is the second of two religious holidays celebrated by Muslims worldwide each year. It honors the willingness of Abraham (Ibrahim) to sacrifice his promised son, Ishmael (Ismail)a, as an act of submission to God’s command, before God then intervened, through his angel Jibra’il and informs him that his sacrifice has already been accepted. The meat from the sacrificed animal is preferred to be divided into three parts. The family retains one third of the share; another third is given to relatives, friends and neighbors; and the remaining third is given to the poor and needy.

In the lunar-based Islamic calendar, Eid al-Adha falls on the 10th day of Dhu al-Hijjah and lasts for four days. In the international (Gregorian) calendar, the dates vary from year to year, drifting approximately 11 days earlier each year.

Eid al-Adha is the latter of the two Eid holidays, the former being Eid al-Fitr. The basis for the observance comes from the 196th ayah (verse) of Al-Baqara, the second sura of the Quran. The word “Eid” appears once in Al-Ma’ida, the fifth sura of the Quran, with the meaning “solemn festival”.

Like Eid al-Fitr, Eid al-Adha begins with a Sunnah prayer of two rakats followed by a sermon (khutbah). Eid al-Adha celebrations start after the descent of the Hujjaj, the pilgrims performing the Hajj, from Mount Arafat, a hill east of Mecca. Eid sacrifice may take place until sunset on the 13th day of Dhu al-Hijjah. The days of Eid have been singled out in the Hadith as “days of remembrance”. The takbir (days) of Tashriq are from the Fajr prayer of the 9th of Dhu al-Hijjah up to the Asr prayer of the 13th of Dhu al-Hijjah (5 days and 4 nights). This equals 23 prayers: 5 on the 9th–12th, which equals 20, and 3 on the 13th. 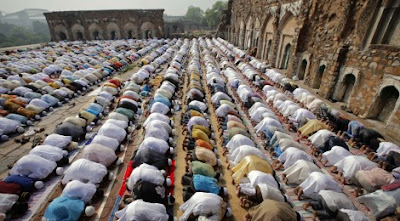 Muslims go to the mosque to pray the prayer of the Eid.

When is it performed

The Sunnah of preparation 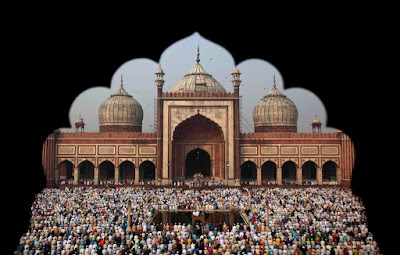 In keeping with the tradition of Muhammad, Muslims are encouraged to prepare themselves for the occasion of Eid. Below is a list of things Muslims are recommended to do in preparation for the Eid al-Adha festival:

Rituals of the Eid prayers 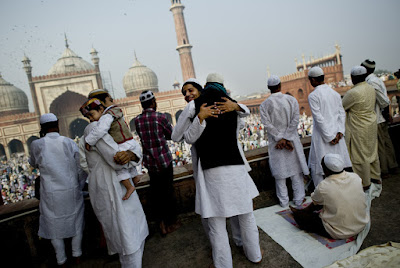 The scholars differed concerning the ruling on Eid prayers. There are three scholarly points of view:

That Eid prayer is Sunnah mu’akkadah (recommended). This is the view of Malik ibn Anas and Al-Shafi‘i.

That it is a Fard Kifaya (communal obligation). This is the view of Abū Ḥanīfa.

That it is Wajib on all Muslim men (a duty for each Muslim and is obligatory for men); those who do not do it with no excuse are considered sinners. This is the view of Ahmad ibn Hanbal, and was also narrated from Abū Ḥanīfa.

Eid prayers must be offered in congregation. It consists of two rakats (units) with seven Takbirs in the first Raka’ah and five Takbirs in the second Raka’ah. For Sunni Muslims, Salat al-Eid differs from the five daily canonical prayers in that no adhan (call to prayer) or iqama (call) is pronounced for the two Eid prayers. The salat (prayer) is then followed by the khutbah, or sermon, by the Imam.

At the conclusion of the prayers and sermon, Muslims embrace and exchange greetings with one other (Eid Mubarak), give gifts (Eidi) to children, and visit one another. Many Muslims also take this opportunity to invite their non-Muslim friends, neighbours, co-workers and classmates to their Eid festivities to better acquaint them about Islam and Muslim culture.

The Takbir and other rituals 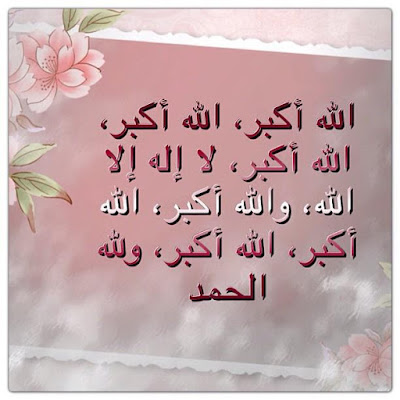 The Takbir is recited from the dawn of the ninth of Dhu al-Hijjah to the thirteenth, and consists of: